I’ve heard of a “Temple Cafe,” where a cafe looks like a temple, but Houshouji Temple is the first “Temple Cafe” that’s really a temple. Well, actually, there’s a cafe set up in one section of this venerable temple. 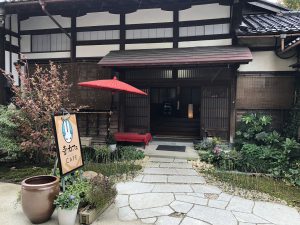 Houshouji, a Buddhist temple belonging to the Rinzai sect, was built by Maeda Toshitsune, the Kaga clan’s third leader, in the early Edo period (early 1600s). I assumed that building a cafe in a temple was not exactly welcomed by the traditional Buddhist establishment. There must have been opposition expressed and eyebrows raised.

I’ve talked with the head priest at Houshouji several times, and I think that if I were to describe him succinctly, I’d say he’s a true believer. He told me that originally in India, a Buddhist temple was a place where people would casually stop by to chat while sharing a cup of tea. We still use the Japanese word “terakoya,” which means that years ago, adults used temples as schools for the children. 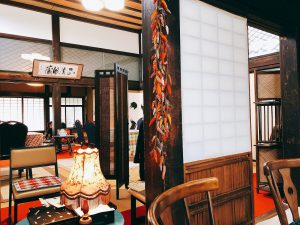 When the Temple Cafe opened, I thought it was a good thing. I remembered the discussion of a while back about people getting away from Buddhism, so I thought this might be a good way to attract people back to the temple. But the situation today is not getting better. There are over 77,000 temples in Japan, but more than 20,000 of them don’t have any priests. With today’s declining birthrate, aging population, and overall population decline, the neighborhood Buddhist temple is in a precarious situation.

In light of all this, I can see how anxious he must feel and why he feels that change is needed.

Houshouji priests have maintained this ancient building for many, many years, so I can sort of understand how the quiet Zen Buddhists might be put on edge by strangers sitting around drinking tea in their temple. 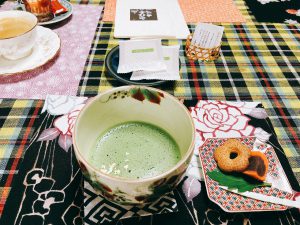 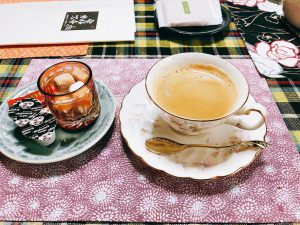 The food and drink menu is rather inexpensive compared to the usual cafe. At the moment, most customers seem to be tourists, but I think most customers here should be from around here.