This site is built on WordPress with plug-ins running on top of it. The relationship between WordPress and the plug-ins is similar to the relationship between a computer OS and the software running on it. So if WordPress suddenly gets an upgrade, the plug-ins may not work properly unless they also get upgrades. In practice, this sort of surprise upgrade rarely happens, but this time it did. WordPress carried out a major upgrade in December. What’s more, the plug-in that caused the most trouble was the multilingual plug-in used for building foreign language websites. Ouch!

This blog has been up and running (on and off) for nearly 10 years, mostly with true Kanazawa fans and assorted volunteers. For a few weeks, it seemed like we might have to finally accept the inevitable and throw in the towel. But, no! We were rescued by a certain Mr. H., a genius web designer and Kanazawa Blog supporter living in Tokyo, who worked a miracle that put us back in business. “God giveth and God taketh away.”

During the unintended break, I heard from people in and out of Japan asking what happened and telling me to get it all back together, so once again, with your help, I’ll do my best to keep posting to the Kanazawa Blog. 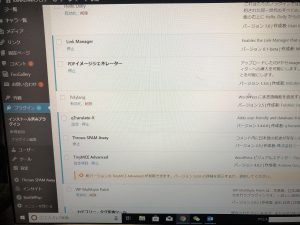