As you may know, sardines can go bad pretty quickly, so most restaurants hesitate to put sardine sashimi on the menu. But the chef at Iwashigumi is an expert on freshness, and the first thing I order when I walk in the door is the sardine “tataki” (minced sardines), which comes wrapped in crispy, grilled “nori” seaweed. 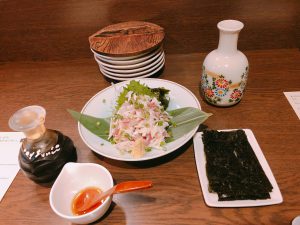 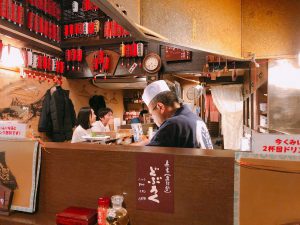 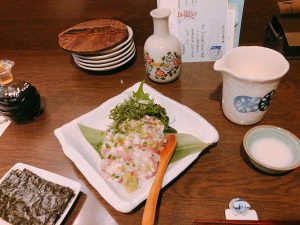 Sardine Tataki with Plum
The sake from Sougen Brewery in Suzu is especially good.

I’ve heard from restaurateurs that without cutting corners somewhere, the restaurant business just doesn’t pay. A coffee shop near where I once worked was known for its tasty “hayashi rice” (beef stew on rice). But the master once whispered to me that the beef stew itself came from a warm-it-up package he bought at the wholesale supermarket. I was there one day a little later having coffee, and a lady was complimenting the chef on the delicious “hayashi rice” and asking him for recipe tips. I remember the look on his face as he tried to gracefully sidestep the question without telling the truth.

If you go over to the wholesale supermarket, you’ll catch a glimpse of the secrets of eating and drinking establishments. Particularly easy to prepare are frozen foods: fish, pork, croquettes, and various kinds of tempura. All the chef has to do is deep fry the pieces one by one at the restaurant. Compared to doing it all yourself, the benefit is obvious.

But if you’ve been to Iwashigumi even once, you’ll know that this is a place that does it all from scratch, from beginning to end. It’s one of only a few high-end shops that are open to the general public.

Buying frozen sardines would result in a significant cost savings, but deliberately not preparing food that way just may be why Iwashigumi is as good as it is.

A thank you letter received from an overseas customer.